As many (myself included) were quick to report, searches related to “moving to Canada” and other foreign countries reached an all-time high following Trump's victory. Live election coverage also reported that the Canadian immigration site had crashed under heavy traffic, which contributed to more visits, causing the site to crash regularly for several hours. Here's a quick look at that trend:

Google Searches for “Move to Canada”

What else did people search for following the surprise news that Trump would likely win the White House? Below are several graphs from Google trends showing unusual activity for various search terms.

Searches related to seceding from the union reached a 4-year high following Trump's win. The only other time where these kinds of searches were higher was when Obama established the whitehouse.gov petition site, promising to comment on petitions garnering over 25,000 signatures. Six petitions for secession crossed this threshold, prompting a huge amount of media hype and fairly dismissive responses from officials.

These states appear to be most interested in seceding. Shading is done by per-capita interest. 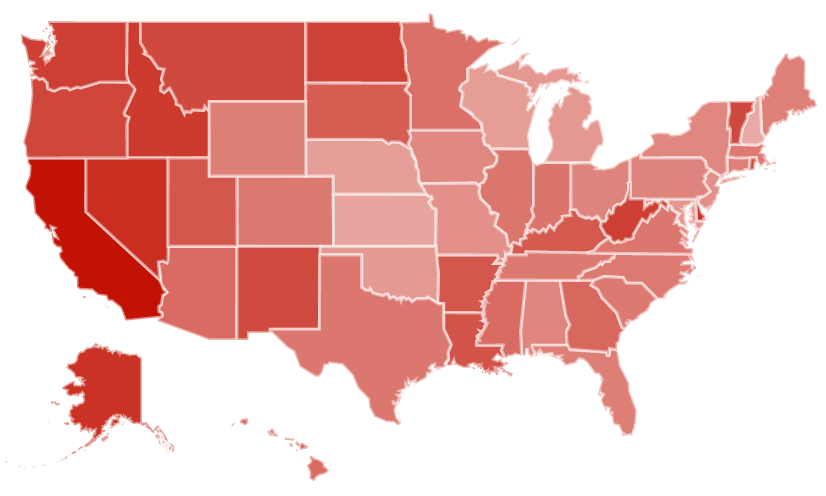 While the west coast and liberal Vermont are not surprising, West Virginia and some conservative states stand out. As it turns out, most of these searches come from cities like Charleston, and they tend to focus on seceding from republican states rather than from the union. Lest anyone worry, these searches have mostly returned to normal in the last week.

Americans loved Robin Williams deeply: the week of his death saw the highest search volume ever for suicide hotlines. USA Today reported on this phenomenon where calls to suicide prevention hotlines was 12-100% higher following the news. When viewed at a month level, November 2016 is the new record-holder for many suicide-related terms.

It will be a moment before we can determine the actual number of shares sold, but the Dow did drop 750 points (about 4%) in after-hours trading following Trump's win, making it one of the largest point drops in history. Searches relating to stock selling and market crashes reached peaks, but actual markets rallied shortly thereafter.

This is the trend that never happened. As some have joked, “Obama was the best gun salesman in history.” Clinton probably would have done better in that regard. While gun sales and searches were high leading into the election, interest is on its way back to regular levels. You can almost track gun-buying searches to Clinton's poll numbers in the preceding months.

Have anything else you think might have risen or fallen following Trump's election? Leave a comment and we'll take a look.