The season eight premiere of ‘Game of Thrones' broke another record for HBO with over 17 million viewers the night of the premiere. This is a trend that has continued every season. This doesn't include numbers of viewers who have watched in on-demand since, or who will in the coming weeks, estimated to be in the tens of millions per episode.

The show has by all accounts taken HBO from a prestige network to a globally competitive one. Subscriber numbers have exponentially increased year-over-year through the ‘Game of Thrones' run, sitting at 130 million globally.

But now comes an interesting dilemma. ‘Game of Thrones' ends after this season, unquestionably the network's current flagship show. Even worse, several other popular shows, including ‘Westworld,' ‘Insecure,' and ‘Curb Your Enthusiasm' won't be returning until 2020. While more GoT-related content is in the works, there's no telling when that might release either.

And despite all of the critical praise many of HBO's other shows have earned in the past few years, nothing has come close to the success of ‘Thrones' commercially.

So then the question presents itself: How many people are going to cancel their HBO subscriptions after ‘Game of Thrones' ends this spring? We wanted an answer to this question so we took a survey to find out.

How likely is it that you cancel your HBO subscription once Game of Thrones ends? 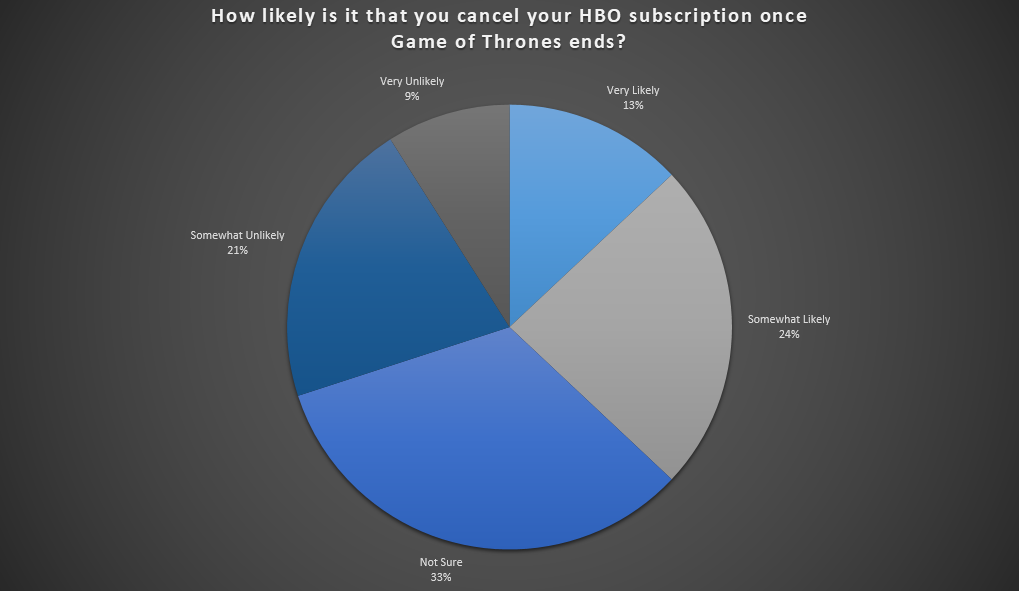 If estimations that approximately 1/4th of HBO subscribers watch ‘Game of Thrones,' this could be a loss in the tens of millions of subscribers for the network.

We also found some other interesting metrics from the optional demographic data requested in the survey:

It is important to note that while many people who responded to this survey might believe they are going to cancel when GoT ends, it isn't unlikely that many won't follow through with it. A parallel example of this is any time Netflix announces a price increase, people express intention to cancel but rarely do.

While HBO has to be worried about the potential subscriber loss from such a successful show ending, the network has proven several times over the past two decades that they can find new hit TV shows. Competition between the networks continues to grow, and yet HBO remains in the game. People were preaching the death of HBO following ‘The Sopranos' finale, and yet here we are.

‘Game of Thrones' is lightning in a bottle, certainly. And to replicate this success seems almost impossible, but we're not betting against the network just yet.

Read Previous The Best Time… Read Next The Most Underserved…