Skip to content
Home | News | Report: ‘Social Media’ Now the Most Common Thing Given Up For Lent

Report: ‘Social Media’ Now the Most Common Thing Given Up For Lent

Religious or not, Lent can be a great time of year to give up a distraction and refocus on other things that might be more important in our lives. While popularized in religious circles, Lent is spreading into the secular world, as more people participate in the fasting of some specific thing over the 40 days that lead up to the Easter holiday.

Every other year, we run a survey of Americans who are giving something up for Lent, and this year social media overtook alcohol for the top spot. For years, booze had been at the top of the list, but not in 2019. Other big movers include television, which fell off the top chart and into the “other” category.

Of a survey of 586 American adults, here are the top 10 things people claim to be giving up for lent: 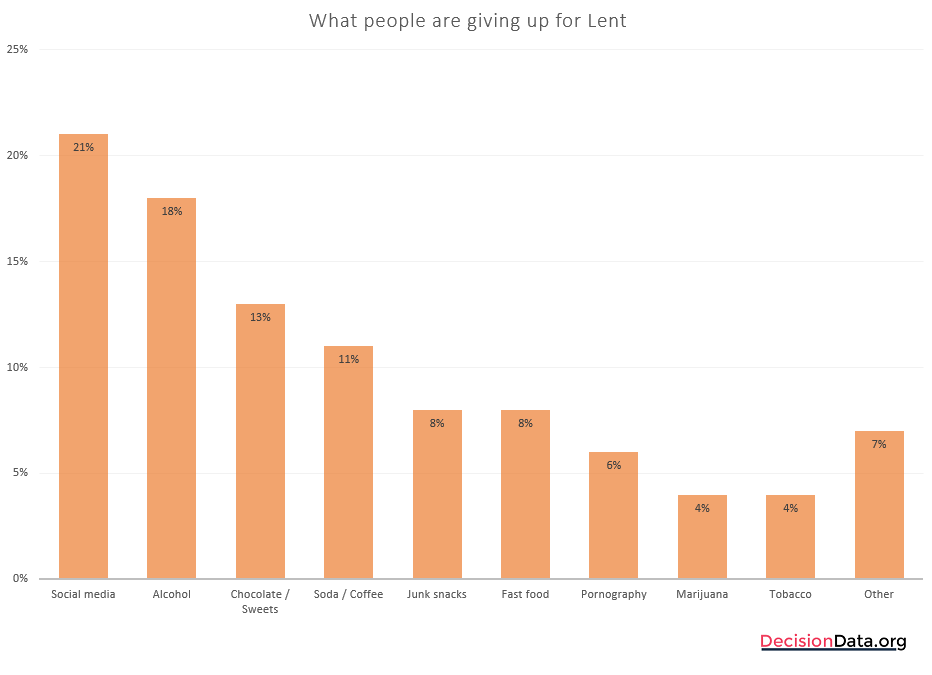 It could be a growing disdain toward social media. Or perhaps the prevalence of the weekly screen time notification on iPhone reminding us how much time we're spending scrolling through Instagram's explore page. Whatever the reason, people seem ready to take a break from social media and Lent is a catalyst for many to do so.

With the recent trend of negative press for social media giants, it also makes sense that people might feel more inclined to take a break.

Following social media on the list, it's a long list of food and drink, with alcohol holding strong in the number two spot. Several oddball items made the “other” list, like music, television, a few people responded saying “news,” which sounds like a pleasant idea as well.

Of course we had to ask the respondents how confident they felt that they would stick to their Lent plans. In general it seems people feel pretty motivated (at least at the start of Lent) to stick with it. Below you can see the responses:

How confident are you that you can stick to your Lent plans?