Skip to content
Home | News | Is All Publicity Good Publicity for Republicans?

Published on December 19, 2015 by Ryan Whitacker

It's been said that “all publicity is good publicity.” Our analysis shows that this is mostly true in the Republican primary: unless you're Jeb Bush.

We analyzed the correlation between search interest on Google Trends and polling data from RealClearPolitics to determine when publicity helps candidates most. Here are the overall trends: first for search interest and then for poll data. 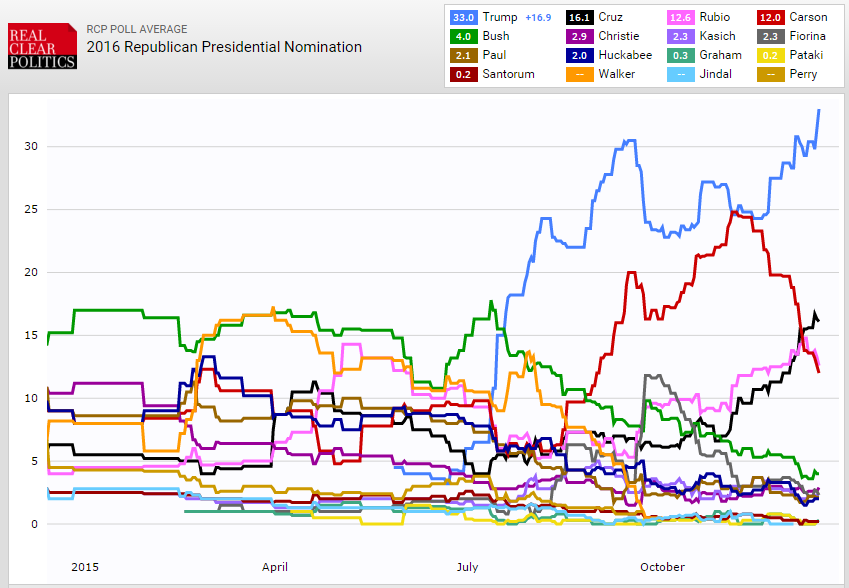 In the first graph you can clearly see the spike in Google searches for a candidate right after they announce their candidacy. Some candidates (like Trump and Cruz) received a big boost in the polls after announcing, but others (like Ben Carson) were almost completely flat in the polls after announcing. Carson had to wait for the first primary debate to gain any ground. Note that in all cases Google Trends is just using a relative number where 25 is half of 50. It does not stand for anything specific.

The RCP graph by itself is a little messy, but you can still make out a strong correlation between Google searches and poll figures. Trump wasn't Googled very often between October and November, and his poll numbers took a hit. The exception was a debate in mid-November where his poll numbers increased along with searches. Josh Kraushaar with the National Journal wrote a piece called “Donald Trump’s Huge Debate Blunder” suggesting he'd “cut in­to his over­whelm­ing sup­port among blue-col­lar voters.” Obviously primary voters didn't see it that way.

Who Needs the Media Most?

I've heard lots of political analysts on NPR say things like, “the worst thing for Trump is not to be in the headlines.” Our analysis shows that's more true for other candidates than it is for Trump:

Candidates are generally doing better when people search for them, but no one more than Ben Carson. The lack of Google searches lately correlates closely with his drop in the polls. Jeb Bush, on the other hand, seems to do worse when people are Googling him most. A -16% simple correlation isn't very strong, but it's at least not helpful for Bush when more people search for him online.

Let's take a closer look at some of the candidates to see what hurt and what helped.

Peaks in search interest often seem to happen before surges in the polls. This makes sense: Google is capturing numbers as they research and look for big headlines. Polls have a bit of a lag as people change their minds.  Debates are playing a huge role in this campaign, but any change they have takes at least a few days to play out in the polls.

Cruz's poll numbers align relatively closely with Google's search trend. The most interesting thing here is Cruz's massive surge in the number of people looking for him this week after the most recent debate. Based on this data it wouldn't be surprising to see Cruz surge even higher in polls over the next few weeks.

This is a wacky graph. If I didn't know what I was looking for I'd assume some element of seasonality. Rubio seems to break into the news almost exactly every 42 days, after which everyone promptly forgets about him. The debate performances do seem to be helping him – just not as much as a similar amount of interest would help other candidates. For Rubio, publicity only seems to help a little, and the only way he's getting it is through debates.

Carson's media coverage has been far more detrimental to his campaign. After surging in the polls after the first and second debates, he's steadily fallen in polls ever since the third debate. While Carson's rise (generally) tracked well with Google searches for his name, that all came to an end in perhaps the most notable deviation among all candidates so far. There is one large distinction between Trump's negative coverage and Carson's negative coverage: Carson was criticized for making false claims and being dishonest. Trump was criticized for being “insane” or racist, but rarely for lying.

As expected, this graph shows that despite big surges in searches after most debates, Jeb continues to fall. Given the weak bump after the second debate and the consistent downward trend after the third, it seems like whatever people are finding online isn't changing their minds about him. For Bush, more publicity might actually be harmful – or, more likely, it's far more helpful to his competition as they steal away his remaining supporters during every debate.

Can Google be Used to Predict Future Polls?

Like any good statistician, economist, or analyst will tell you about anything, “it depends.” Based on the data we could make some predictions after this most recent debate based on who people are looking for. A prediction is only as good as the data behind it, and in this case I'd call it “very interesting, limited, and potentially predictive.” Still, what fun is life without a little risk? Here are my predictions:

Check back in a couple weeks to see if I'm right.

[author] [author_image timthumb='on'][/author_image] [author_info]Ryan Whitacker is one of DecisionData's founders. Ryan is a data freak, news junkie, and open data fanatic. He's worked for political organizations and nonprofits as a data analyst, developer, and consultant.[/author_info] [/author]

Read Previous How Much Universal… Read Next 2016 Presidential Media…