Skip to content
Home | News | Internet Addiction Disorder: What You Need to Know and How to Help

Internet Addiction Disorder: What You Need to Know and How to Help

First coined in 1996, Internet Addiction Disorder (IAD) is a growing field of study for many psychologists. IAD is classified as a compulsive behavior in which a person spends most of their time and energy either being online or thinking about being online. In turn, this impulse affects aspects of daily life, from social interactions to work performance.

IAD is becoming more recognized and widespread. In “Internet Addiction: A Brief Summary of Research and Practice,” some psychologists noted the rate for those suffering from IAD in the U.S. and Europe is between 1.5 and 8.2%, while others believe it could be as much as 18.5%.

IAD is classified under Obsessive-Compulsive Disorder (OCD) due to the compulsive nature presented in those who have addictions to being online. This includes the frequency of time spent online as well as other behaviors that can manifest.

Do You Have Internet Addiction Disorder?

First, it’s important to differentiate between an addiction to technology and IAD. Technology addiction is more ambiguous, as it concerns the device a person uses. This could be anything from video games to TV. IAD is focused solely on internet use.

Internet addiction can take many behavioral forms. The person could be addicted to online pornography, gaming, gambling or social media use.

With these things in mind, how does one become addicted to different aspects of using the internet?

Using the internet has many different layers of rewards because it’s similar to gambling in that both work on a variable ratio reinforcement schedule. Anytime a person logs online to chat or game, they might not share the same experience they received last time.

These rewards triggered by the thrill of internet use can cause a person’s brain to produce dopamine. Over time, as the person requires more dopamine, they’ll gravitate to the activity that helped them produce it in the first place.

Some people use the internet to escape from daily life or to fix other problems like depression. Taking internet access away from them can be akin to taking cigarettes away from a habitual smoker.

Therefore, it’s important for people to reflect on their internet usage: Can I go hours without the internet? And if I do, how will I react to it?

How Does the Disorder Affect People?

“Many parents might notice when they take the internet away (smartphone or tablet) from their children, the child becomes upset. This could lead to behavioral and developmental problems, as children who become addicted to the internet have shorter attention spans and might have difficulty developing meaningful relationships,” said Dr. Brian Wind, Ph.D.

As children age, they often gain access to smartphones or personal computers. With so many children using social media to connect with peers, an environment is created where they are sharing their lives online all the time.

This can enhance peer pressure, resulting in increased anxiety and depression. Even more problematic is when a parent takes away access to the internet or phone. This can produce withdrawal symptoms of frustration and anger, as the child doesn’t have access to that stimulation their brain is craving.

Meanwhile, in adults, studies show those who are addicted to internet use might also have other compulsive behaviors. These can include drinking, attention deficit hyperactivity disorder, disassociation and anger.

The reason for this is the same rewards receptors in the brain triggered during internet use are also found in other addictive disorders. So, it isn’t uncommon for people to use the internet to mask other issues.

Chatting online with strangers, sharing a social media post or even playing online games can produce a high some people might not find in other interactions. However, as the search for this high continues, it isn’t uncommon for users to disassociate from other aspects of their life such as social, educational and occupational opportunities.

What are the Available Treatments?

When treating someone for IAD, a doctor will seek to treat the underlying conditions that initially triggered the person to turn to the internet for escape.

One approach is to use serotonin reuptake inhibitors to treat the underlying conditions of depression. The drug Escitalopram has shown in studies to greatly reduce internet use among those who have IAD.

Another method is replacing dopamine in a more natural way. Some doctors recommend their patients focus on exercising more, as the simple act of doing so removes them from the computer or their smartphone. By exercising, their bodies release dopamine, which helps them associate a healthy activity with feeling better.

There are also assistive technology options that are providing some great results for treating and controlling IAD.

As noted, internet addiction disorder is a relatively new field of study for psychologists. However, as the prevalence of using smartphones and computers becomes a more primary way to shop, bank – and even date – understanding how IAD behaviors develop can help someone recognize when it's time to seek help.

In addition, there are many therapies available for IAD sufferers, from pharmacology options that treat underlying conditions, to behavioral therapies, which help the person use the internet more effectively. There are also many assistive technologies available to restrict and better manage internet use.

Many internet users who suffer from IAD have underlying conditions that can trigger other addictions. Therefore, it’s important to get help as soon as possible.

Read Previous ANALYSIS: US Falls… Read Next How Online Rehab… 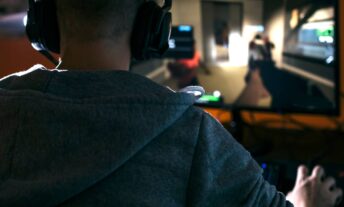