How Much Universal Healthcare Would Cost in the US

I recently published an article calculating the costs of all Bernie Sander's proposals. The article spread quickly on Facebook and Reddit; the most common disagreement (by far) could be paraphrased, “Universal Healthcare wouldn't cost anything.” Fiscal conservatives, of course, are quick to deride the idea that you can get something for nothing. There's a lot of confusion in both conservative and liberal camps, so let's see if we can set the record straight for both groups.

Jump to the conclusion

When you look at healthcare costs from a government spending perspective there is no scenario where you increase US public spending by 59% (from 47% to 80%) for free. Some liberal supporters of UHC (universal healthcare) seem to have misunderstood what “savings” means and believe taxes (or payments to the government) wouldn't even need to increase, and that's simply not true.

With that ob(li)vious objection out of the way, let's dig into the real interesting data question: Would universal healthcare save Americans money overall?

Opponents of UHC should be careful not to use the conclusion above as a straw-man argument against supporters who actually knows what they're talking about. What most well-informed proponents of UHC mean when they say it “wouldn't cost Americans anything” is that the private plus public costs would decrease. If the money Americans pay to private companies went to the government instead, would that be sufficient to cover universal healthcare costs?

The lazy approach would be to compare the US to other systems and subtract the difference. That would give you huge savings overall for private + public spending, but it would ignore the reality of differences in costs and potential increases in demand.

US healthcare is expensive. The first big reason is that our doctors and surgeons are paid very well. The data below comes from Harvard economist David Cutler. 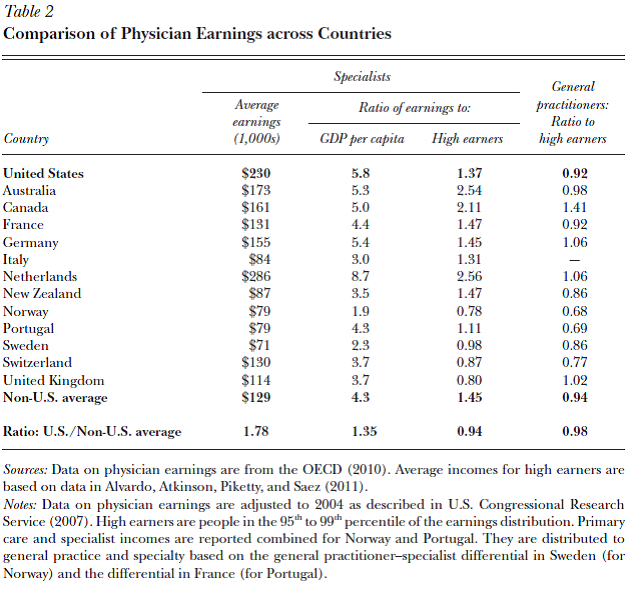 I haven't heard any politicians arguing that we should cut doctor's salaries; it would be a mistake to assume the US system would mirror a system like the United Kingdom where doctors make half as much. Not surprisingly, the Netherlands (which pays doctors more) comes in second in total healthcare spending as a percentage of GDP. Switzerland is second in overall spending. Total costs and doctor pay align well in correlation with a few exceptions like Norway and Sweden. 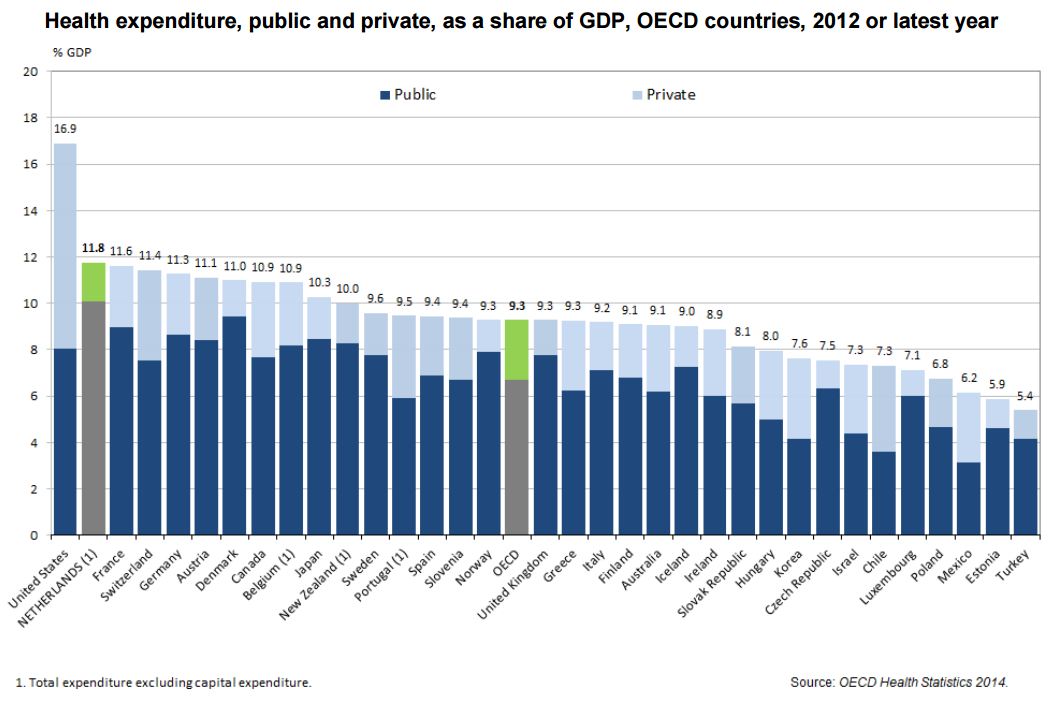 The US far outpaces every country in both raw spending and spending as a percentage of GDP. The US is nowhere near first place for life expectancy (15th out of 34) or quality of care despite all that spending. We broke down OECD key statistics and found 3 major reasons American healthcare costs are so much higher.

Obviously we're not going to get thinner by passing a new law, so we'll have to keep the costs of an obese and more diabetic population. I also don't see US politicians talking about patent reform for drugs, and the pharmacy lobby in the US is huge. It would again be a mistake to assume patent reform immediately as a part of universal healthcare.

The Netherlands is actually a good baseline to use, since private companies still exist as more regulated entities alongside the government system, and it's not likely the US will ever shut down private companies. When we add in the costs of obesity and the drug costs listed above, we land at around $6,862 per person on average in the United States. That's a total savings of around $1,851 per person; $600 billion overall, or about 21.2% of the total cost of healthcare.

That's right in line with other estimates – arrived at in a totally different way by looking at private insurance companies directly. It's satisfyingly close to economist Gerald Friedman's 2008 estimate that universal healthcare would save $570 billion per year in total healthcare costs.

Final word: eliminating the middleman in insurance could save the USA about $600 billion on current care. (About 5% of GDP)

When you reduce the cost of something, demand tends to go up. One example is the Affordable Care Act (Obamacare). The ACA included limits on how much could be charged as a co-pay for routine checkups. When co-pays for check-ups fell we saw doctor visits rise. You can also look at out-of-pocket expenses for visiting doctors around the world and see that the cheaper it is to go to the doctor the more visits people make on average. Given that uninsured working-age people are about 40% more likely to die than their insured counterparts, it seems naive to assume that people without insurance are receiving the same level of care that insured people receive. People don't “go to the doctor anyway.”

Rather than try to build complex economic models that try to guess at behavior, let's just look at the behavior itself. On average people without insurance spend about half as much on healthcare. This means they'd spend about twice as much (199.6%) if they had insurance. As the first graph shows, average total spending is $8,713 per person, which is $6,970 if we assume 80% of costs covered. Given that uninsured Americans are already spending 50.1% of that, the increase in government spending would be $3,492 per newly-insured person. If the 32 million uninsured Americans were to receive insurance today it would cost the government about 111.8 billion. (80% of $139.7 billion in total new spending)

= Savings of $600 billion on current care

= Total cost of US health costs under UHC: $2.3 trillion

Universal Health Care would save the people of the United States about $600 billion for the same level of care they're receiving. We found it would require an additional $562 billion in taxation to cover the government spending, after savings and increases to demand. Is a single-payer universal system worth it? As always, that's for you to decide – we're just here to give you the data that helps you make important decisions.

Read Previous Trump’s Immigration Plan… Read Next Is All Publicity…