Skip to content
Home | News | Alcohol the Number One Thing Given Up For Lent, Social Media Climbing the List

Alcohol the Number One Thing Given Up For Lent, Social Media Climbing the List

One of our favorite surveys to run is finding out what people are giving up for lent.

This year, same as before, alcohol remains at the top of the list. But most notably is the rise in social media on the list of things people are giving up, with 14% of respondents giving up their Facebook and Snapchat time to spend more of their focus on other things.

We surveyed 606 US adults on what they were planning on giving up for lent. Here is how they responded: 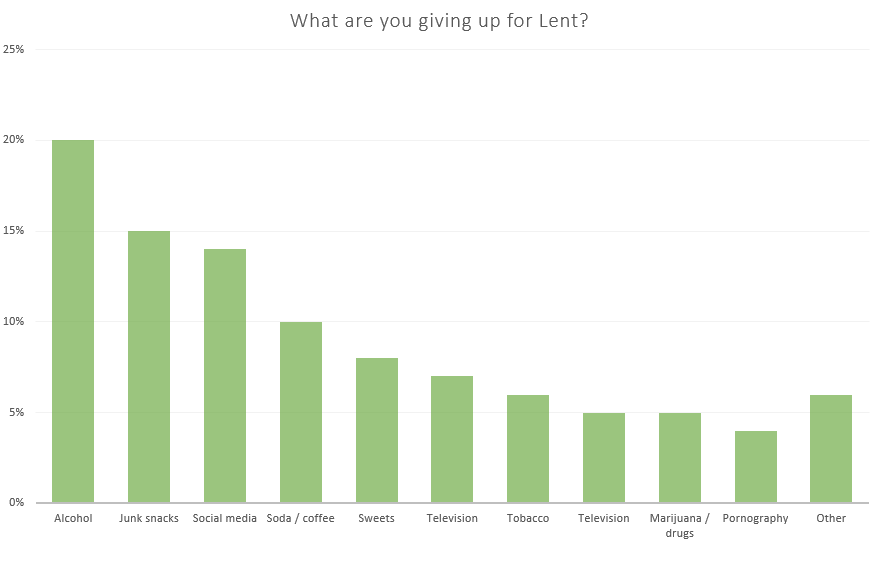 Interestingly, television continues to fall on this survey, as fewer and fewer people say they're going to give up TV in the weeks leading up to Easter. Our guess here is that people either are watching less of what they consider television (traditional cable for example), or perhaps more and more people consider streaming services a utility in their daily lives.

Some of the things in the “Other” category this year were fun. Two respondents said they were going to give up exercise, another few said video games, and another small group said going out to eat.

Good luck to all of our respondents and their goals for Lent.

Read Previous The Aftermath: Surprising… Read Next Trump’s Budget for…