We generally like to think of our team here at Decision Data as rational. But even as data scientists and people who love to play armchair behavioral economists, we simply cannot resist the appeal of a tax return.

All the reasoning and logic in the world about how it's better to pay the correct amount in taxes every paycheck and keep more of your money upfront doesn't help the fact that it's simply awesome to get a “bonus” every April, even if it is our own money. It's the large scale equivalent of finding $20 in a coat pocket.

Giving the government a free loan for 11 months? Doesn't matter, it's still nice to get that sweet, sweet refund.

We wanted to see how common this was, so we ran a research survey to get some numbers.

Methodology: We took a survey of 1,251 US citizens to get a feel for how many people prefer getting a tax refund to collecting a slightly larger paycheck. We tested several versions of the question until we landed on one that seemed to avoid suggestion.

“If the total amount of money you receive is the same in a given year, do you prefer getting a tax refund, or do you prefer a slightly larger paycheck?”  turned out to be the best version of the question after running several experiments.

Below you can see the results: 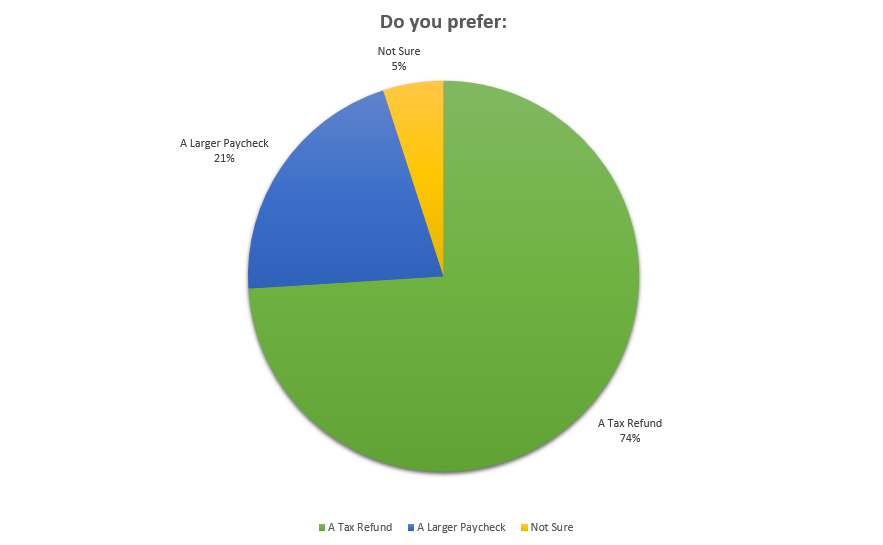 The idea for this survey came from the recent upheaval regarding the 2018 tax season. US taxpayers are seeing lower refunds and as both The Washington Post and New York Times point out, this should be viewed as a win for the individual. Paying less taxes on every check and then not getting a refund means more of your take home pay is immediately available to you. Not to mention the irrationality of handing out a free loan to the United States should not be cause for joy that many feel when they get their refund.

But even as we spoke with several survey respondents who voted that they prefer a tax refund, no amount of explaining changed their mind. People simply prefer the “bonus” feel of a tax refund.

The average tax refund in 2018 was approximately $2,700. If this amount was properly un-taxed over the course of a year, this would be about $100 extra on every paycheck. We can see the appeal of a one-time payout of $2,700 having a shininess factor over $100 on each bi-weekly paycheck.

People tend to take their tax refunds as windfall, typically paying a bill or debt, saving a large portion of it, or maybe buying something on their wish list. It's easier to do so with one lump sum than it is to do so with a small amount saved up over the course of a year.

Read Previous 70% of People… Read Next The Best Time…