Starting at 24.99 for the first twelve months!*

Introductory offers from internet service providers can seem like a great deal, especially when you look at your existing monthly bill and realize it's almost double these advertised rates plastered all over billboards and internet ads.

But then, the devil in the details reveals itself. Speeds slow down, costs go up, data caps suddenly appear, a customer service conversation turns into a nightmare. It can be incredibly difficult to get an honest picture of exactly what a new ISP will look like until they have their hooks in your house.

As we cover internet service providers in great detail, we thought it would be interesting to take a survey to determine how many people end up regretting switching ISPs after they do so.

Below you will find the results of our survey of 781 US consumers who self-report they have switched ISPs in the past two years. 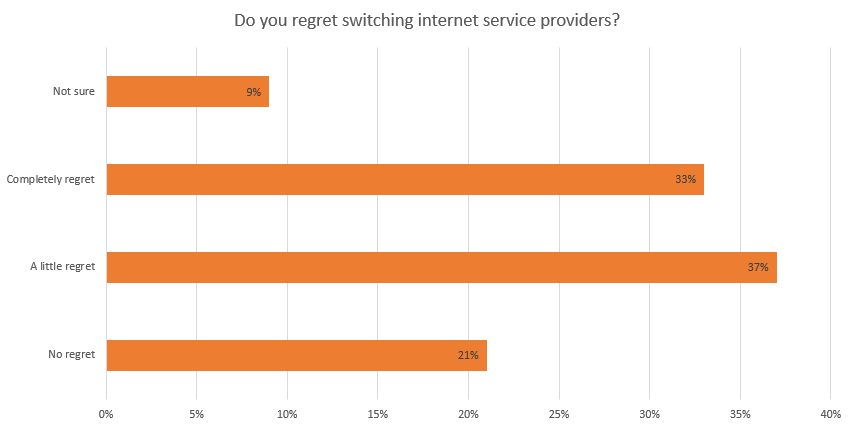 It turns out a substantial number of people regret making the switch. Being hit with surprise charges, not getting the service levels they expected, and in general going through all the effort of making the change in the first place leads to this feeling.

So why do people switch in the first place?

We also asked the same pool of 781 US resident respondents why they decided to switch ISPs. The answers were mixed with one exception, the appeal of what seemed like a great deal at first. By far the most significant reason people switch ISPs was to chase a deal. The FCC (PDF warning) took a survey in 2010 that found 32% of people have switched ISPs in the past three years. We found that the reasons behind why people switch hasn't changed much from the FCC's 2010 survey 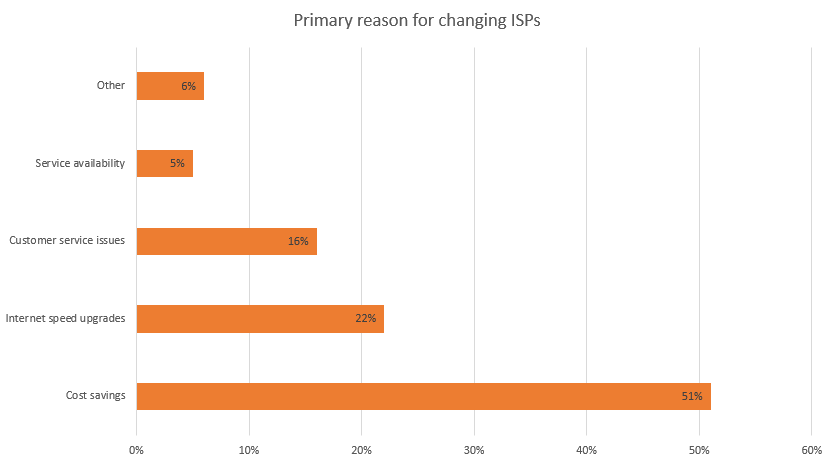 We offered a comment section on the survey to allow respondents to anonymously comment as to their reasoning behind their feelings. Below are some of the highlights:

“Signed up because of a new introductory offer, got stuck in a two-year contract and ended up paying way more per month than I was originally. Read the fine print!”

“A new provider came to our neighborhood and had a great deal so we took them up on it. Not only did their service end up being worse, the costs jumped after the deal ended and now we're stuck with them for another nine months. Can't wait to switch back.”

“Made the switch for customer service reasons and we are now happier with our new service.”

“I read the details, and jump between providers every year or two depending on who has the best deal.”

We found that last quote the most interesting because it shows someone with the power of choice. It's rare to have more than one major cable or DSL provider in a given region, but when it does happen, consumers enjoy being able to move much more freely between them.