Published by Ryan Whitacker on September 18, 2019

As the campaign for president has heated up heading into the fall of 2019, Joe Biden's campaign has increasingly blamed the media for their biased coverage of their candidate. For example, campaign staff vented furiously to Politico this last week about how their candidate gets very little coverage, and when he does it's for a gaffe or outrage over a moment taken out of context. Of course he's not the only one: Sanders has repeatedly claimed a bias in the media, including from The Washington Post. Given our highly-cited analysis of the 2016 campaign, we decided to check into the claim that the media is not being fair to one of the leading candidates.

Who Doesn't Get Coverage?

The first item to investigate was whether any of the top 5 candidates are being ignored by the media. Candidates like Buttigieg who poll lower will generally also receive less media coverage. We looked at poll figures versus media coverage share (see methodology for a definition of media share), and found a very strong correlation (rsq = .53). The graph below compares average poll results minus the media share. Warren receives far more media coverage than one would expect for a candidate polling 2nd/3rd, while Biden receives far less than his expected share. 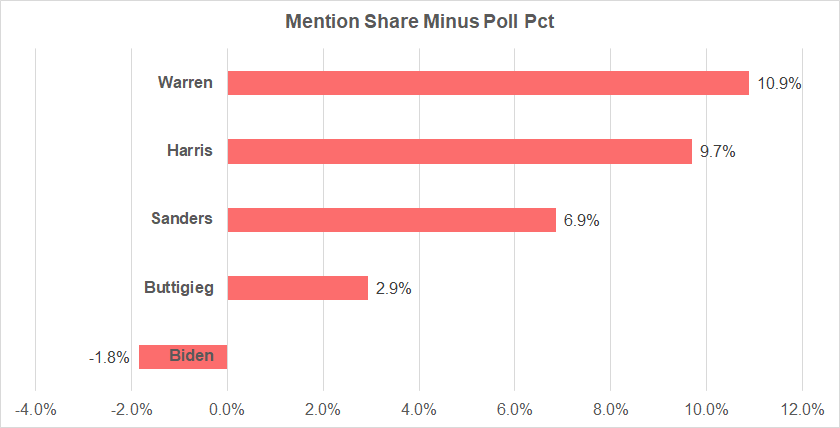 Our two primary data sources were Archive.org‘s TV News Archive and FiveThirtyEight's National 2020 Democratic Presidential Primary Polls. National news percentage above is calculated as that candidate's mentions for the week, divided by a sum of the top 5 candidates mentioned.

For example, in mid February  there were 1637 mentions on major news networks that week about any of the 5 candidates above. Biden was mentioned in 239 of those stories, meaning he had a 14.5% share of mentions despite polling at 32%. The difference for that week was -17.5%: his worst week in terms of being mentioned versus other candidates. Sanders was the primary beneficiary of Biden disappearing. After receiving over 1/3 of mentions from late February to early March, he soared from 19% in the polls to 27%, nearly overtaking Biden before things cooled down.

We did also analyze Google searches, but the number of people looking for a candidate does not appear to have a significant impact on the race or media coverage so far. Biden was Googled even less on average than Kamala Harris. This likely points more to the demographics of those using the internet for research: people who are younger, more liberal, and less likely to consume news from other sources. The map below from Google Trends shows which states Googled each candidate more this year. 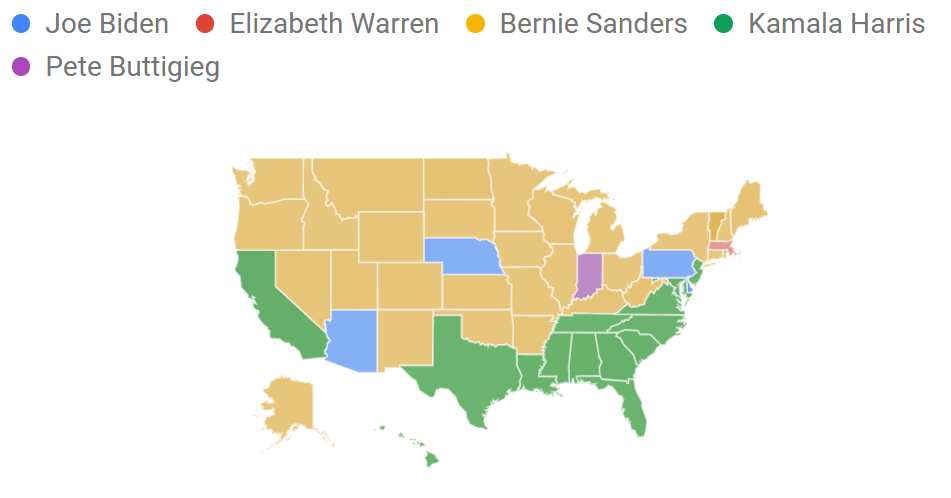 As we saw in 2016, Bernie Sanders' supporters are more likely to use Google. It's an interesting map, but not a representative sample of the party, as candidates with appeal to younger voters are over-represented.

What if the Coverage Was Negative?

Based on our analysis the positive or negative impact of media coverage was mostly negligible with one big exception. Biden lost a sizeable portion of his lead in early April after allegations of unwelcome behavior from Biden while he was VP. His apology was also covered in a less-than-positive light. Otherwise the impact of what could be called negative media coverage has been either fleeting, nonexistent, or actually helpful.

The Biden campaign is objectively correct: Overall Sanders and Warren are enjoying more time in the media spotlight at a time when the Biden campaign runs the risk of looking forgettable, boring, or otherwise uninteresting to progressives. But perhaps Biden campaign strategists should be thinking hard about how to get more media attention rather than simply complaining about it.